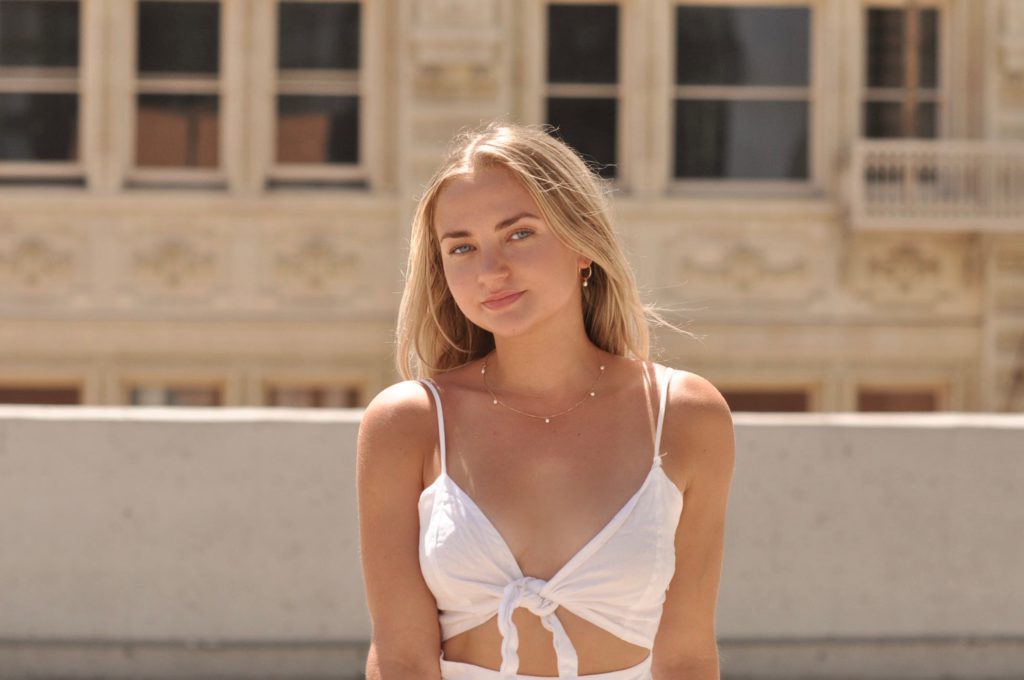 A former member of the corps de ballet with ABT and Colorado Ballet, Alexandra’s journey as a dancer started young. A gold-medalist in the classical division of the Youth American Grand Prix, she was also the recipient of several scholarships to premiere companies such as San Francisco Ballet, Pacific Northwest Ballet, Joffrey Ballet, School of American Ballet and ABT. Since relocating to Los Angeles, Alexandra has explored other disciplines in the wellness sphere. In addition to earning her Yoga certification, she maintains the active blog/website Healthy Ballerina, where she shares her insights for mindful eating, nutrition and holistic health. Alexandra is currently signed with Block Talent Agency, and continues dancing in regular commercial appearances. Alexandra’s classical training combined with a well-balanced approach to fitness make her a wonderful asset to the Align team! 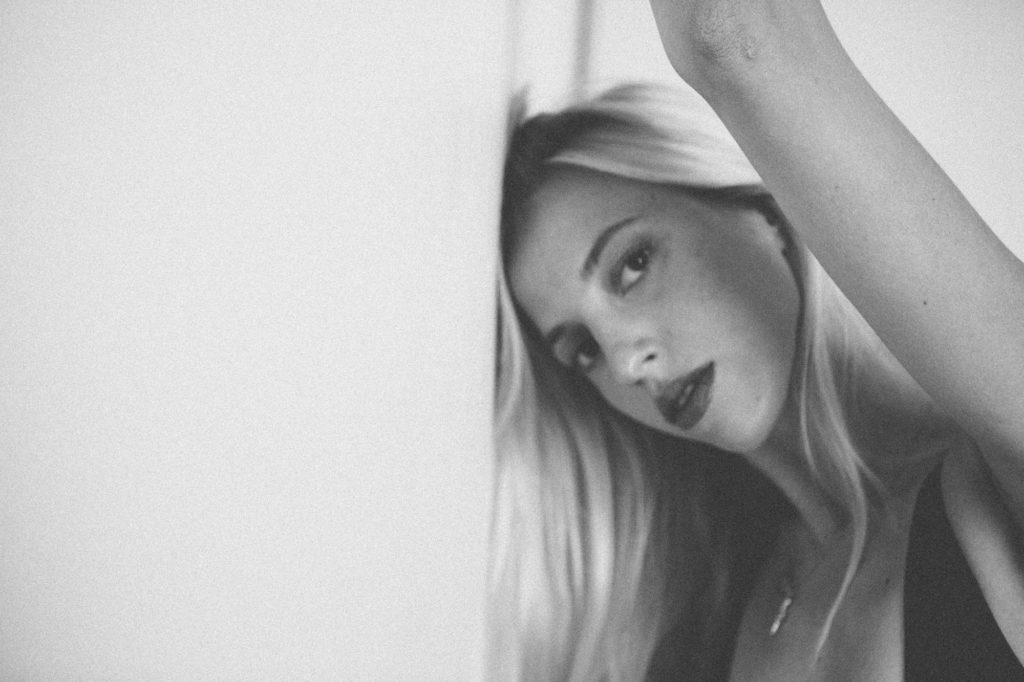 At only 10 years old, Amanda relocated from her home in Sao Paulo, Brazil to New York, where she enrolled in the School of American Ballet. She continued her formal training on full scholarship at ABT’s Jacqueline Kennedy Onassis School, and was invited to join their Studio Company, ABT II.  During her time with ABT, Amanda performed at the MET Opera House, the Kennedy Center, and at historic theaters throughout Europe, and earned her ABT National Training Certification. She has since choreographed and taught Master Classes for Columbia, Yale, Stanford, and numerous international universities. 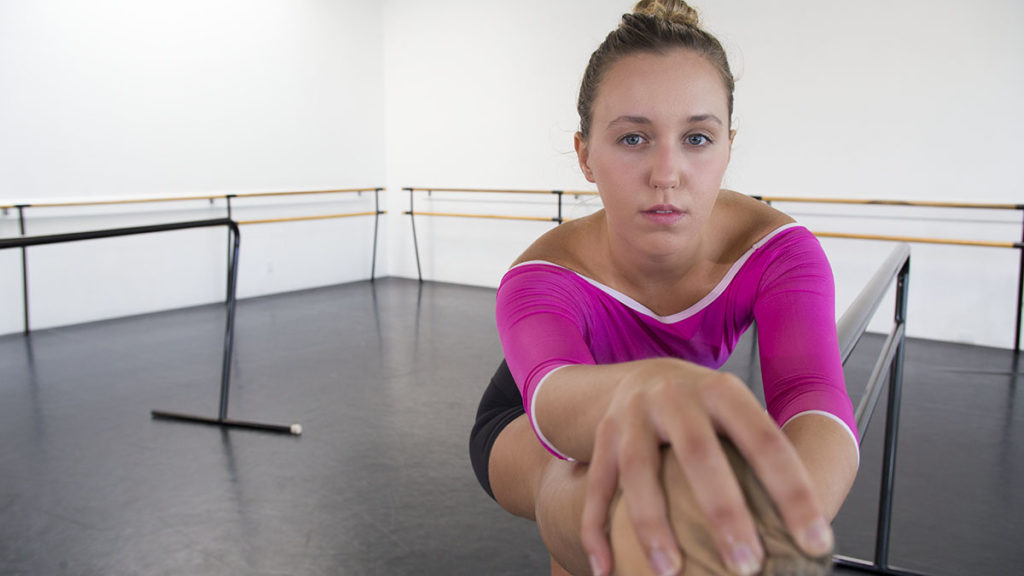 Amanda is an exciting new member of our team. She performs demonstration for our virtual classes, instructs our cardio ballet workout Flight School, and will soon teach our adult beginners. Amanda has a large engaged instagram following. You may find her @amanda.rene

Ashley’s varied and robust credentials include her MFA in Dance Performance and Choreography (UCI), MA in Dance Education (CSULB), and BA in Business & Political Science (USC). She is a former Principal of Ballet Repertory Theater, and danced with Contempo Ballet, The Kenneth Walker Dancer Project, and has many commercial credits as a dancer and choreographer with The Bloc Agency. She also completed ABT’s National Training Curriculum for Pre-Primary – Level 5, and is Pilates certified. Ashley’s enthusiasm for dance education makes her a wonderful addition to the Align staff. Her breadth of knowledge is vast, but you will find her teaching style warm and accessible to students of all levels.

Originally from Florida, Hannah trained with Next Generation Ballet under Peter Stark, and attended acclaimed summer programs with Orlando Ballet, the French Academie of Ballet, Joffrey Ballet, and Cincinnati Ballet (among others). She was a scholarship student in the Alvin Ailey BFA program at Fordham University, NYC, and continued her formal dance education at Houston Ballet Academy and Atlanta Ballet. Hannah toured for two seasons with Oklahoma City Ballet, then relocated to LA, where she has been a company member of American Contemporary Ballet since 2019. Among her many accolades, she also completed the American Ballet Theater Certification program with merit. We are grateful to have such a multi-talented dancer as part of the Align program. Students will learn a lot from Hannah’s fun and challenging classes! 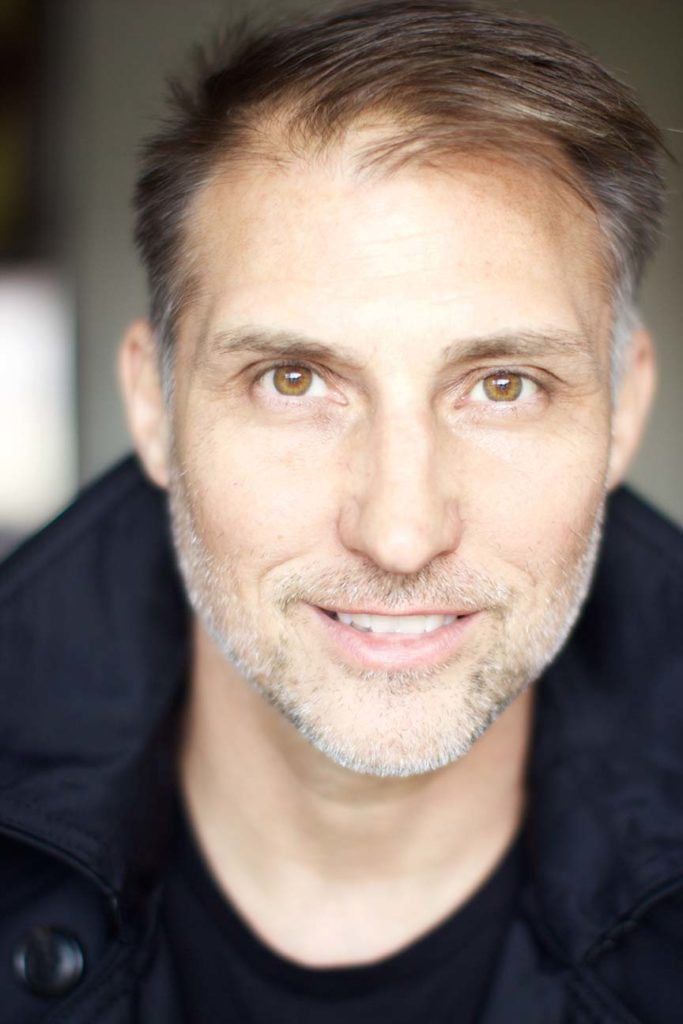 Michael is the founder and CEO of the ALIGN Ballet Method. He studied classical ballet at the National Academy of the Arts, renowned for its illustrious community of students and faculty from all over the world. Upon graduation, he embarked on a 10-year long career with BalletMet, where he danced several leading roles (including pieces designed for him by elite contemporary choreographers).

After retiring from the stage, Michael relocated to Los Angeles. He quickly became a sought-after personal trainer, and created/produced one of the earliest fitness-themed podcasts available in the Apple Store. By 2010, ALIGN 1 officially launched, integrating Michael’s professional background and vision to reach a vast (and underserved) market of adult beginners. The workshops exploded out of the gate, and ALIGN has since been featured by Health, Better Homes and Gardens, Pop Sugar, Angeleno, Daily Candy, KABC Los Angeles, Broadway News, Backstage, and Vogue. He has also taught on-camera segments for celebrities such as Pauly D (MTV’s Jersey Shore), the women of WWE (E!’s Total Divas), and YouTube sensation, Liza Koshy.

Part German and part Native American, Rissi was raised in a creative home as one of five daughters, who all grew up dancing. She was fortunate to train at the Royal Academy of Dance in England and Germany, where she received Exceptional Distinction. At age 15, she moved to NYC to attend the Fame School of the Performing Arts. Her passion for arts education led her to USC, where she completed her studies under a full scholarship. Rissi has taught and performed internationally on stage and in television, working with artists such as James Taylor, The Plain White T’s and Pink Floyd. Rissi is dedicated to sharing her love and knowledge of classical ballet, contemporary performance, and artistic collaboration with diverse communities across LA and beyond. When she is not teaching her well-loved classes at Align, you can find Rissi at Sokamba Creative Collective, where she is a Founding Member and Director. 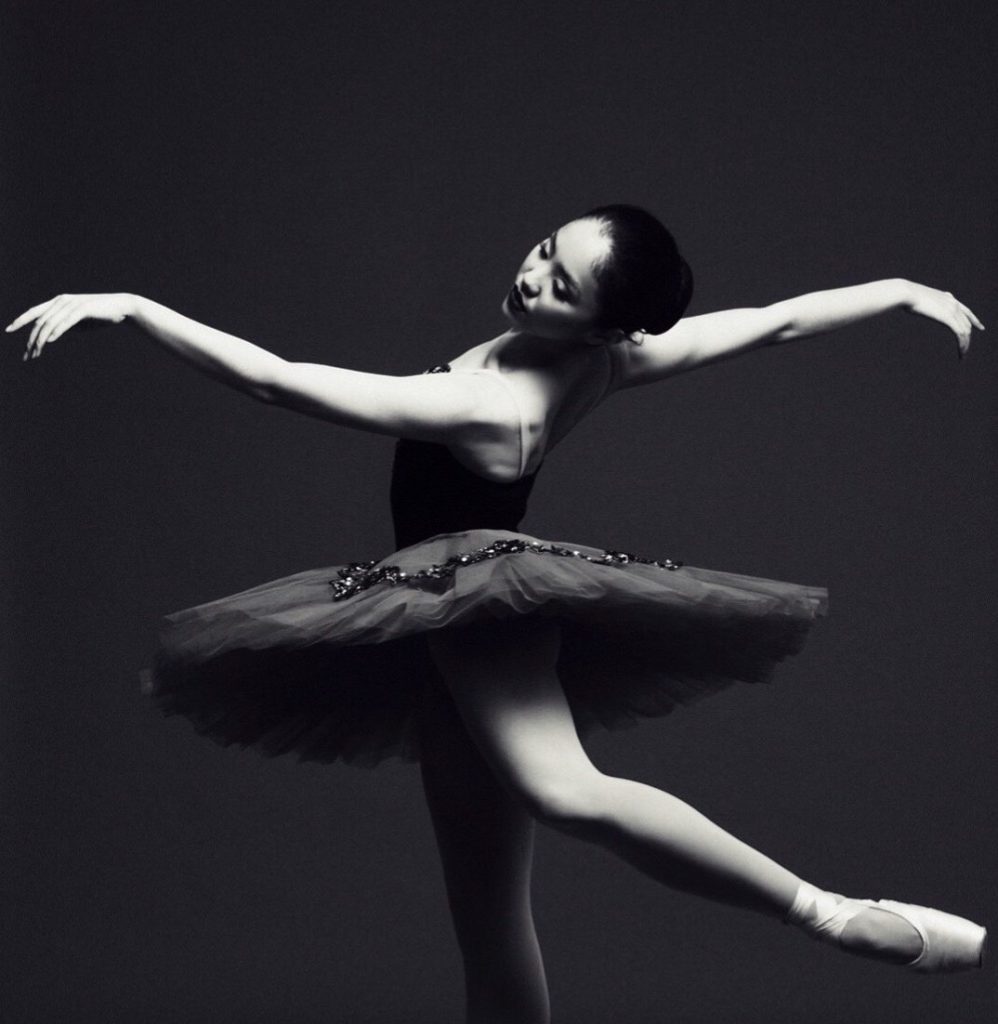 Stella is currently pursuing her MFA in Dance at UCI under a full scholarship. She completed the Royal Academy of Dance of London’s Advanced II Curriculum with high distinction, and went on to train at illustrious ballet schools in New York and California. Stella holds multiple first-place awards from international ballet competitions, and has danced professionally with Anaheim Ballet Company and Festival Ballet Theater. Stella has shared the stage with ballet stars Yuan Yuan Tan, Maria Kotchekova and danced as a guest artist along with Pacific Symphony at Segerstrom Concert Hall. A graduate of ABT’s National Training Curriculum, she has also worked as guest choreographer for Irvine High School. We are excited to have Stella as part of the Align program. Students of any skill level will benefit from her expertise and nurturing energy! 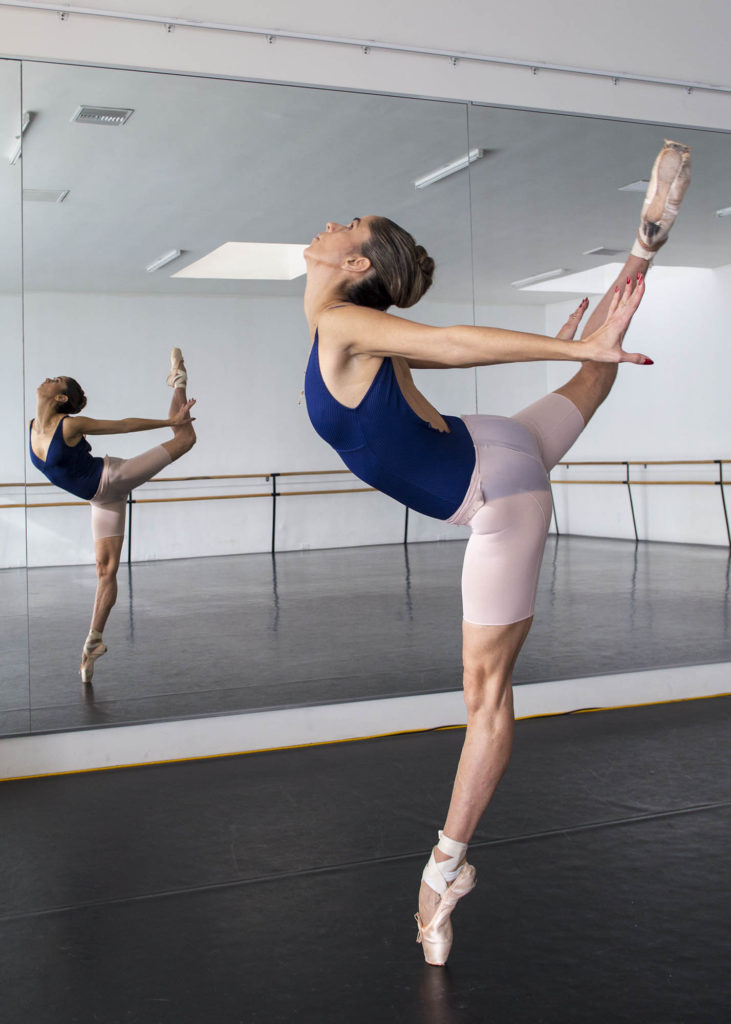 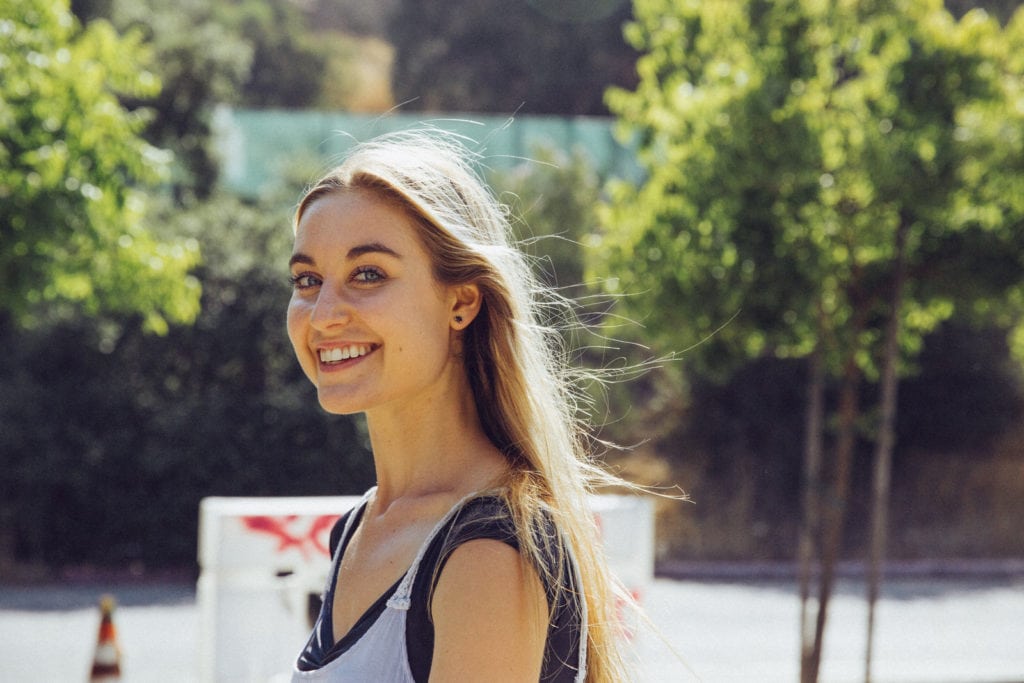 Born in Nova Scotia, Zoe left home early to study at Central Pennsylvania Youth Ballet’s Pre-Professional program. She went on to receive fellowships/contracts with prestigious institutions such as the Merce Cunningham Trust in NYC, Vancouver Opera, Connecticut Ballet, Pasadena Dance Theatre and ArtistsPlus Productions. Zoe is a passionate advocate for mental health, and she is currently working on her degree in Psychology. We are beyond proud to have such a talented, empathetic, and multifaceted instructor as part of our team…going 5+ years strong!